I have seen a few pictures of this draft woven as tea towels and scarves on various blogs and Ravelry, and thought it might be fun to do.  My plan is to do a few towels, off-white for the warp and a bright colour for the weft (a different colour for each towel), in 2/8 organic cotton.  But I thought I might first do a trial run in some 2/8 Cottolin, and make notes.

The green towel with the stripe was the first one I wove, I had seen a few others woven with a stripe and thought I liked it.  Note 1: no stripe, I don’t like it, I think it takes away from the pattern.  Note 2:  harder beat.  While the green one looks okay, they are definitely to drapey for a towel (at least I think so).  The second towel was woven with a denser ppi, I like it a lot better.  There other little notes, but I won’t bore you with all the details. 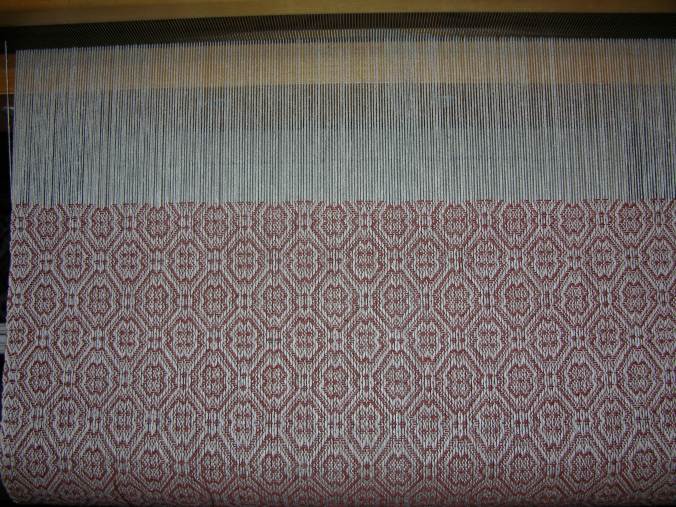 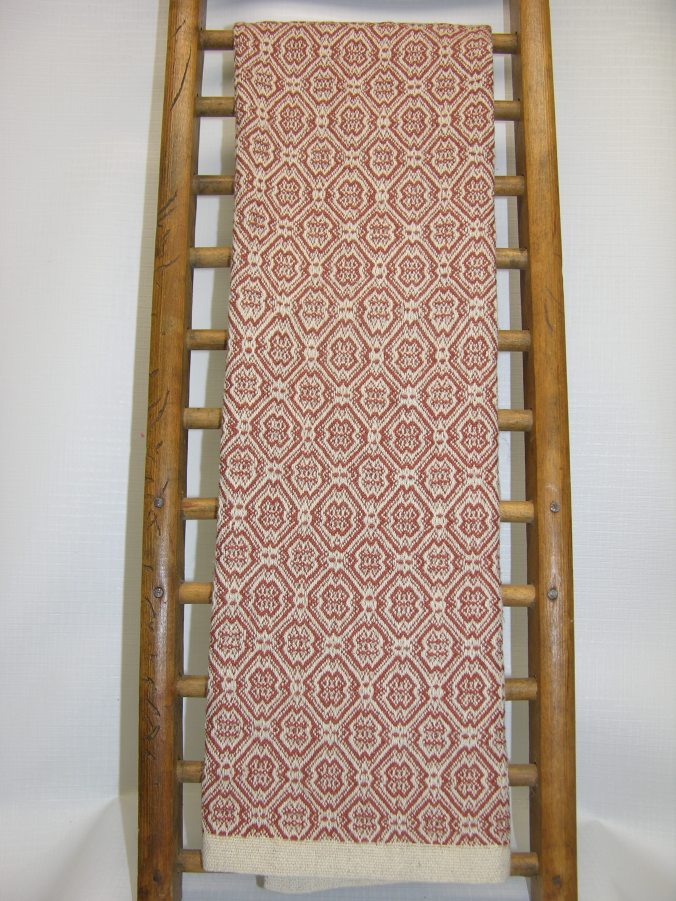 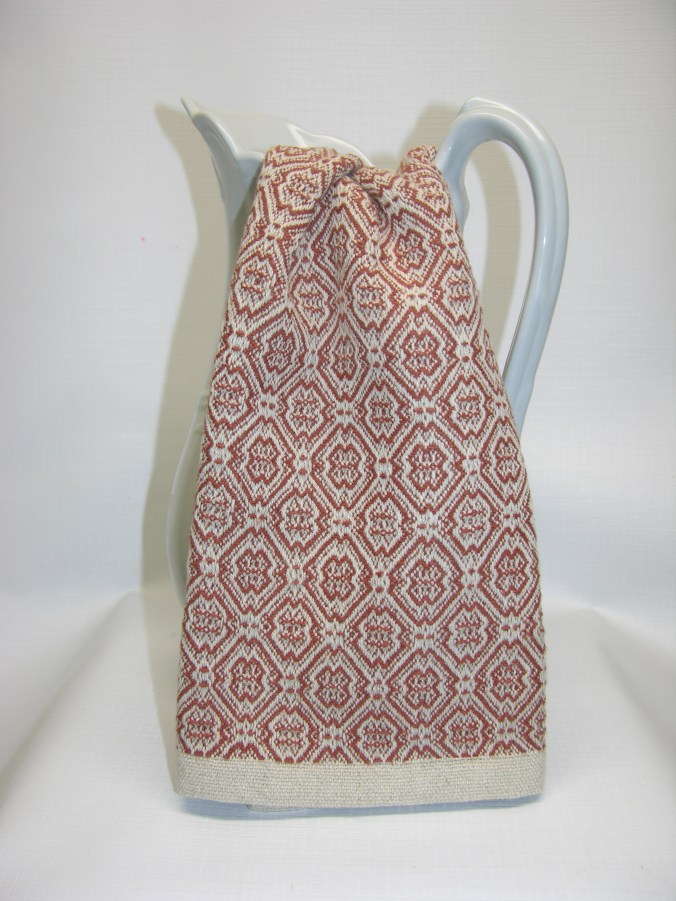 More 2/8 organic cotton has been added to the shop:

Be sure to check out all the colours we have in stock at:  http://www.justknitting.ca/louet-organic-cotton/

Over the course of the last week, I had been weaving a scarf.  The scarf had no intended recipient, wasn’t planned for a particular event, it was just something to weave and enjoy while doing it.  And it was.

I had been thumbing through some back issues of Handwoven, March/April 2012 to be more exact, when I came upon the project Paper Spot scarves.  I had the right  yarn, 2/8 Tencel, and thought it might be fun.

I carefully wound a warp and put it on the loom.  I threaded the heddles and slayed the reed, then tied it all firmly to the front apron rod.  I took the magazine and read the instructions to start:  Spread the warp……weave 2 pattern picks and hemstitch……weave the scarf.  I put the magazine aside.

So, I spread the warp with scrap yarn, I wove two pattern picks (tabby in this case), hemstitched, wove two more tabby picks because I liked the look, and then wove, and wove, and wove.  I finished weaving on Sunday, just before it was time to make dinner.  Great!  I will cut it off the loom and get it ready for hemstitching that evening.  A half hour later, in the middle of dinner preparations, ugh!  I had forgotten all about the tabby picks and hemstitching I had done at the beginning, too late now.  I went ahead and twisted the fringe, washed and dried the scarf (it is amazing how Tencel changes after washing and drying) and gave it a good pressing.  And it doesn’t look half bad.  I may decide to cut off the fringe (oh, all that work) and join the two ends to make an infinity scarf instead (to hide the errors of my way).  A simple note, tacked to the front of the loom, would have been enough to remind me of the finishing for the end of the scarf (writing this blog post has probably cemented it for me), but for now, I give you the scarf: 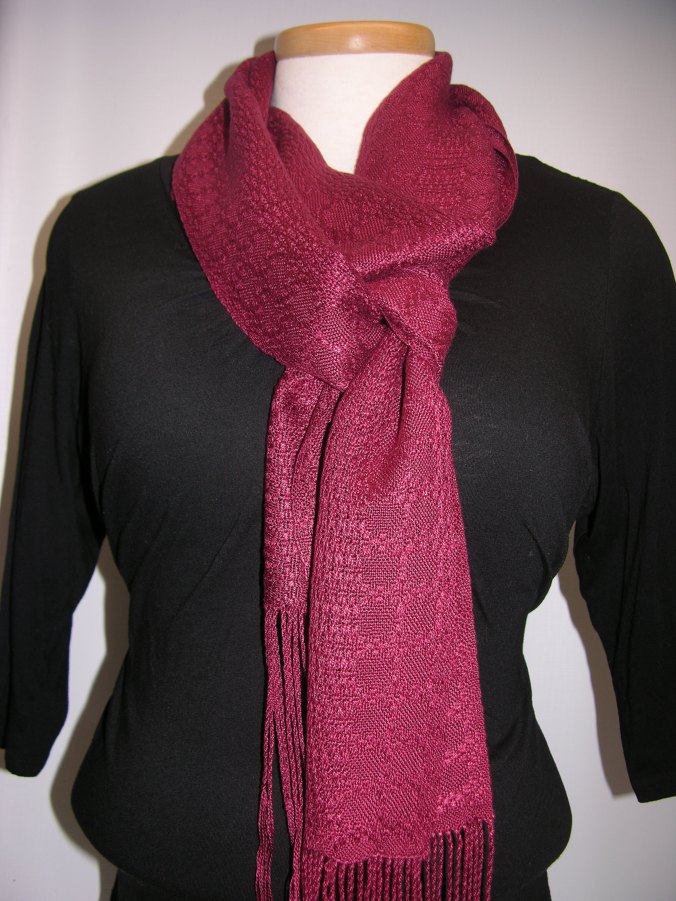 We have added more colours to our selection of 2/8 organic cotton.  This cotton is lovely to weave with, and it machine washes and dries beautifully.  These Keep It Simple towels (available from Interweave here) were woven using this cotton and they are just lovely. 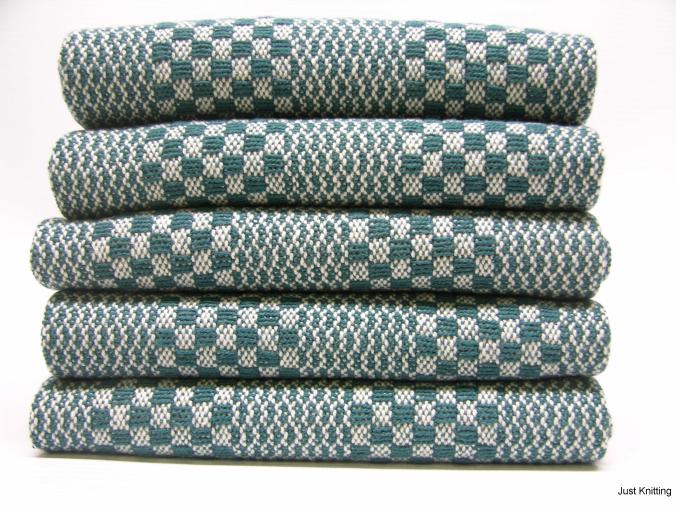 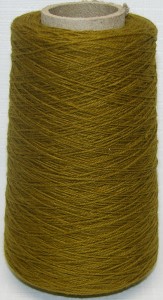 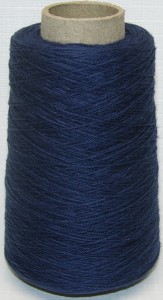 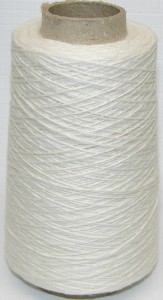 Be sure to check out our full range of colours here.

I decided to revisit the overshot runner project with the 2/16 mercerized cotton warp.  But instead of trying to continue on the existing warp, I decided to make a new warp and put it on another loom.  I made a shorter warp than before, only about 3 yards, using a warping board.  Since this loom has a plain beam, the warp was beamed in the usual manner.  I also replaced all of the existing heddles with brand new inserted eye heddles.  I wanted to see if these changes would provide me with a more pleasurable weaving experience (i.e. no broken threads).

Things seemed to progress okay, but then 3″ into the pattern, the first thread broke.  After another inch, one more, and after another inch, well you get the idea.  I have now woven 20″ and have repaired 11 broken threads.  I am not getting any joy out of this project.  I love the pattern, I love weaving overshot, I love the colour combination, I hate this yarn.  I am not thrilled with the 2/8 mercerized cotton I am using for the weft either.  It seems to be loosely plied and twists on itself and around the tabby yarn as well.

So here is a shot of it before I cut it off the loom.  I have to find a use for the remaining 2/16 (fire starter?), and when I find a better quality yarn, I will try this project again.

And it is most definitely in its infancy stage. 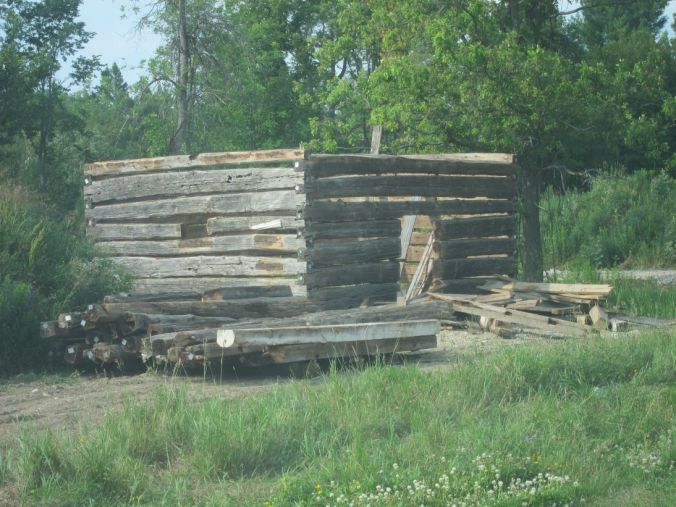 This will eventually become my new weaving studio and store. and though it may not look like much now, I have high hopes for it.

And new Handmaiden and Fleece Artist in stock:

Apparently I was not quite done weaving the crackle scarves, or sampling the orlec, and put on another warp for another two scarves.

This time I chose to do both in the same colour, but two different lengths (on purpose this time), one is about 77″ and the other 107″, not including the fringe.  Despite my concern in the previous post about the scarf being too long, it turns out that people really liked the extra long scarf.  Another surprise is the orlec.  Knitters in my sit ‘n knit group were surprised to find out it was acrylic, not cotton like they thought.

I think I will take a break from the crackle weave and try something else, but I would like to see how they would look in tencel, or silk, or…..

When planning the warp for the snakeskin scarf from my previous post, I decided to put enough on for a second scarf.  The draft from the magazine was for one scarf.  Easy enough, double everything and add a little for “just in case”.

As I wove the first scarf, I pinned a tape measure to it, carefully measuring my progress.  The instructions read to weave for 74″.  I stopped at 73″ because I wanted to stop on the last pick of the draft.  I advanced the warp to leave enough unwoven for the fringes, encountered a bit of a problem, and decided to cut the first scarf off the loom and retie the remaining warp back on.

Since I was certain my math was correct, I didn’t bother measuring as I wove, my main concern was that I might run short because of this unexpected hiccup, but remembering that I added a bit in the beginning for “just in case”.

So, what does all of this have to do with the heading above?  Well, after washing, drying and pressing, my scarf came out at a little over 108″!  And that does not include the fringe!  So while I am happy that my scarf did not come out too short, did it come out too long?  And while the first scarf would be considered a clothing accessory, is this one a statement piece?

Whatever you might call it, I am still happy with the outcome.  Now, to work on my math skills.

A sunny day is a good day for doing laundry and ironing when you live off-grid, so today I finished up some towels that were waiting for just that.
While I have been waiting for a fan filter to come in for the computerized loom, and not wanting to sit idle while doing so, I warped my small loom for my default weaving, overshot table runners. Overshot is a structure that I will never tire of, this one is called Wheel of Fortune.
The chickens have found a sheltered and sunny spot in the drive shed for a dust bath, almost as good as a summer day.
It is a nice mild day, so I have let the chickens out to do some free ranging. One of their first stops is my little garden that is littered with wild bird seed. Our dog keeps a close eye on the hens, because she would really like to catch one but is not allowed to.
Blanket finished and ready for gifting.
Back at the loom weaving up a Christmas present for one of my son's.
Fairs Creek farm
Create a free website or blog at WordPress.com.
Loading Comments...
Comment
×
%d bloggers like this: